To say I was excited would be a bit of an understatement.

We planned on a 2 o’clock start. This would give us plenty of time to ready our gear, have a good lunch and give us enough time to get to Red Cliffs Recreation Area before dark, but not too much time that we would end up staring at each other wishing we had more beer. The first problem with that plan was the fact that the trip was supposed to happen a week earlier so the bikes were basically packed and ready to go with some minor adjustments. Second, a good lunch at 12 makes you sleepy and wanting a nap around 1.

And finally, it means you are waiting all day to go because all you want to do is go. 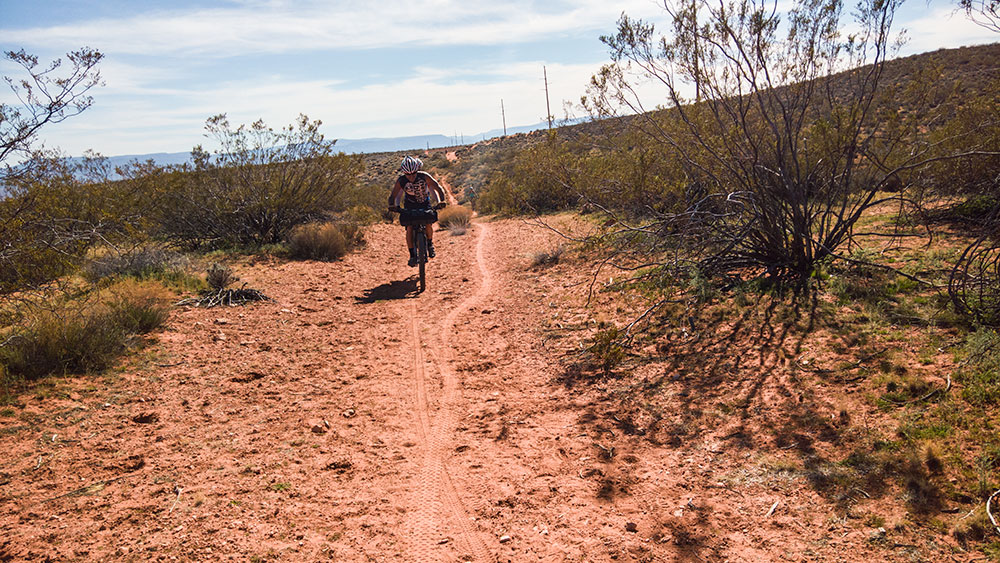 The Tandem Duo, Kenny and Heather pedaling on T-bone.

We met at the shop. There were a few pictures snapped and we began an adventure that was right out of our backdoor. Leaving from the shop meant no cars involved. We headed and began the climb up to the Red Hill. Climbing up this mesa is a bitch, do it loaded and that lunch you had a couple hours ago will be churning in your stomach and the sweat will drip into your eyes and make you question the logic of this route. While you might question it, this is probably the perfect warmup for what was in store.

At the top of the climb, we turned on to the bike path and made our way to Pioneer Park and hit dirt. T-bone is a sandy road. There’s no other way to describe it. Some of it is ride-able and some of it isn’t, unless you are on a fat bike which I was. If you are on Team Fatboy, it’s a nice little jaunt. Loaded makes the climbs a bit stiffer but not too big of a deal. If you aren’t on wide tires, or you bring a bike with no tread, it’s a 1.8 miles hike-a-bike. 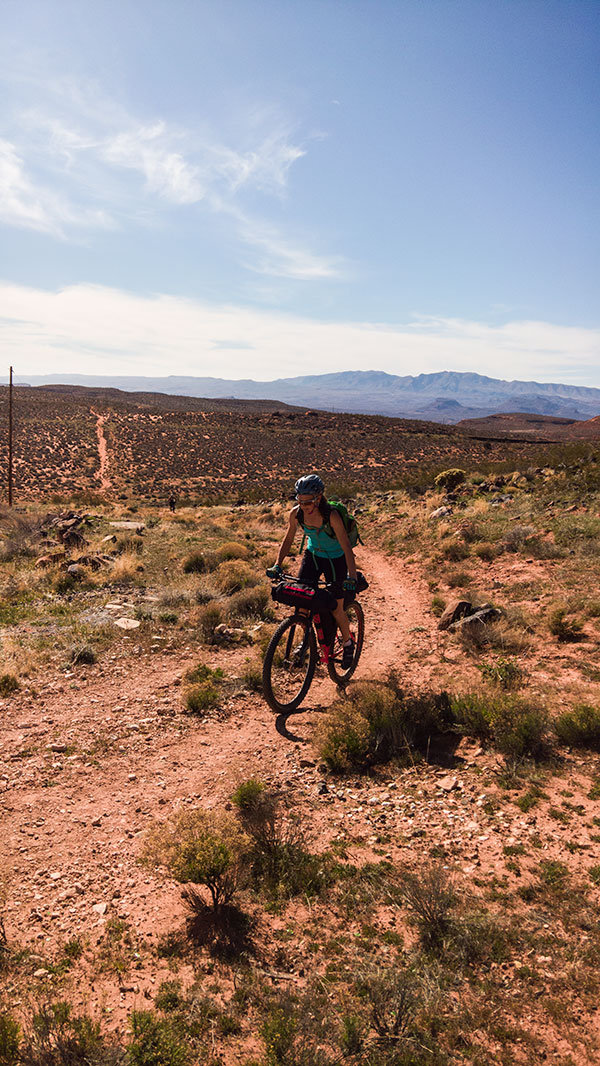 KB rockin’ the singlespeed like it aint no thing. 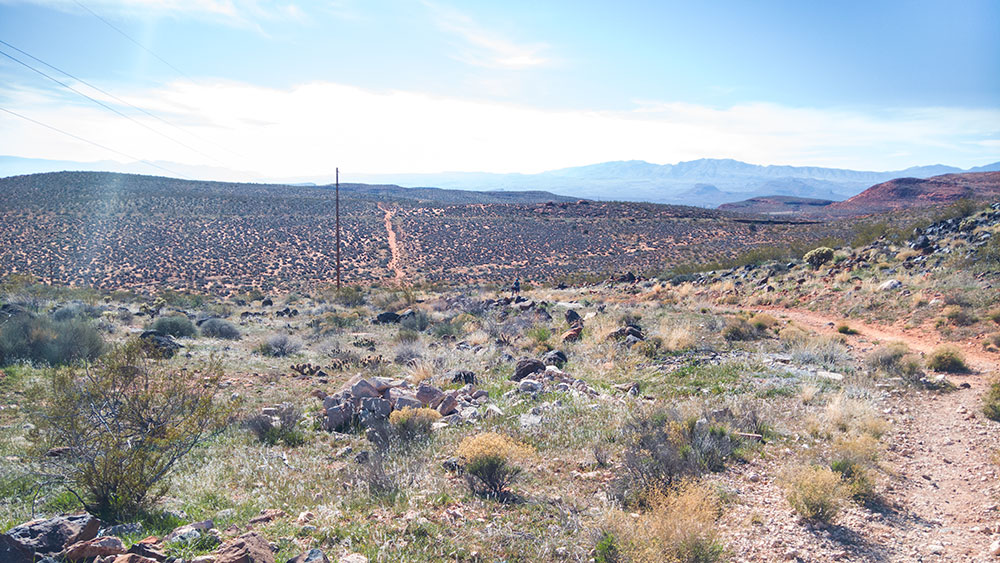 It’s not bikepacking until you push.

T-bone got us to the Turkey Farm Road which was the only other bit of pavement we would need to get to Red Cliffs. The road felt fast after the trudge of T-bone. Joey was contemplating pounding pavement to Grapevine, but decided to continue with the group (probably my fault).

We dropped into Powerline. When you stand on either end of this 6.5 mile dirt road, it looks flat with a climb on each end. As soon as you drop in you find that it is anything but. The hills are just hid behind themselves in a way that it is impossible to tell how many ups and downs you will encounter until you get to them. And each one is steep. 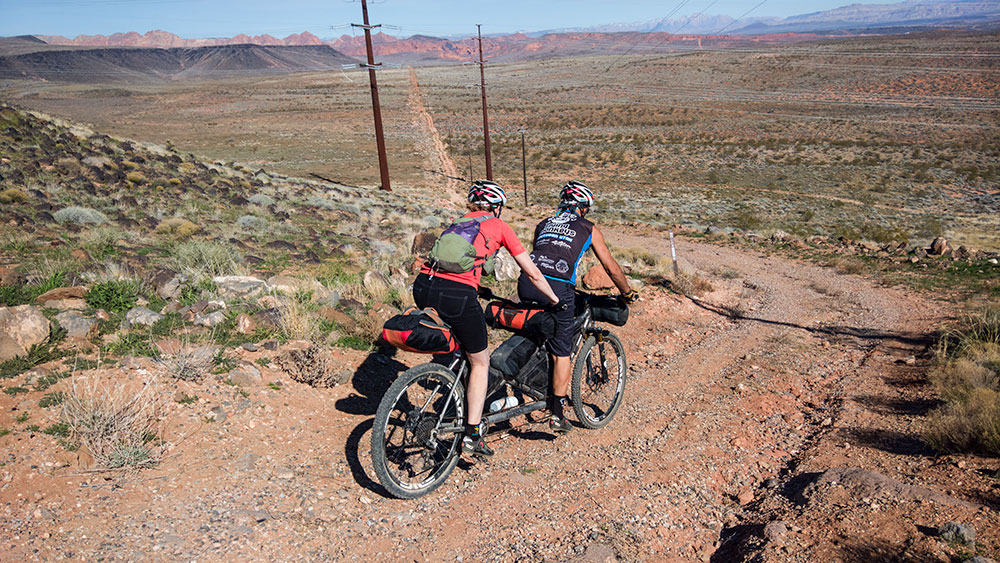 Kenny and Heather Dropping in. 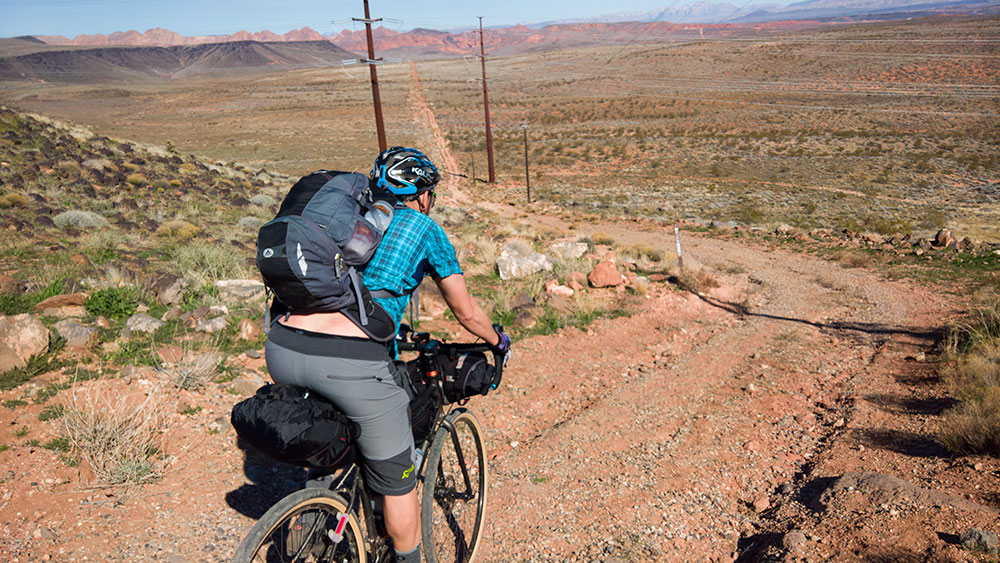 Joey liked the look of gravel and less sand.

We pedaled and pushed through Powerline making descent time considering the variety of bikes, the sand, the grade of the road and being loaded. When we hit Mill Creek, we felt like we were close to the half way point, but the deep sand proved a challenge and one that was met with a fucking shit ton of vulgarities, pushing and burning legs. And just when we thought we had crested, we had one more climb… 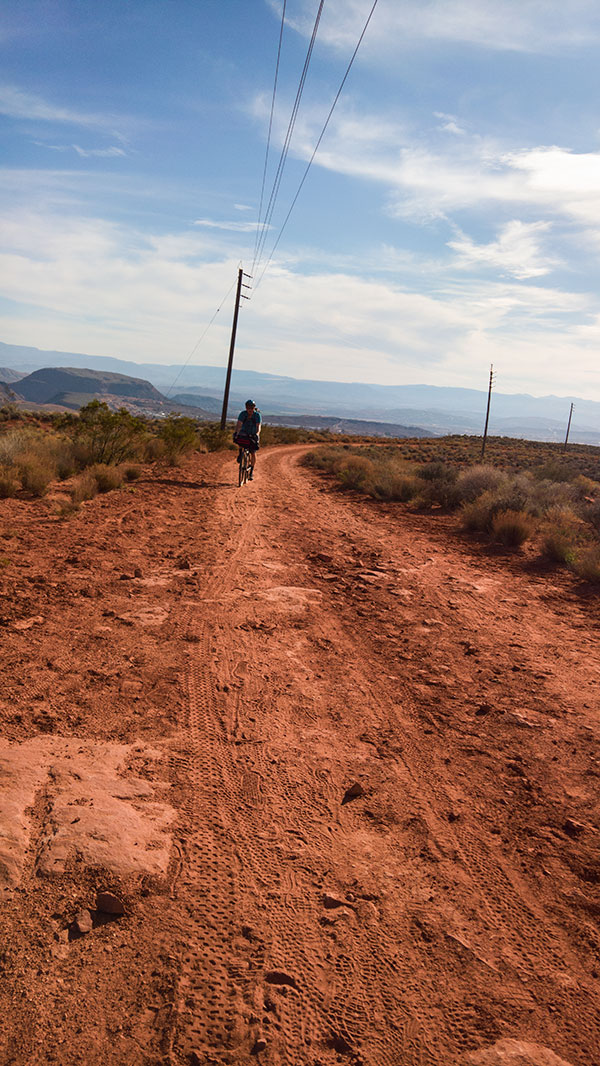 At the end of Mill Creek, just before you hit Main Street, you take left. As far as I know this road has no name, but it allowed us to get to Grapevine without hitting pavement. The initial climb on this section is usually met with cursing. This time, after pushing and pedaling through sand for the past few hours, it was met with relief. We were going up but at least it wasn’t sandy.

The sun was also beginning to drop into the afternoon sky lighting up Pine Valley Mountain and the Red Cliffs Desert Reserve. 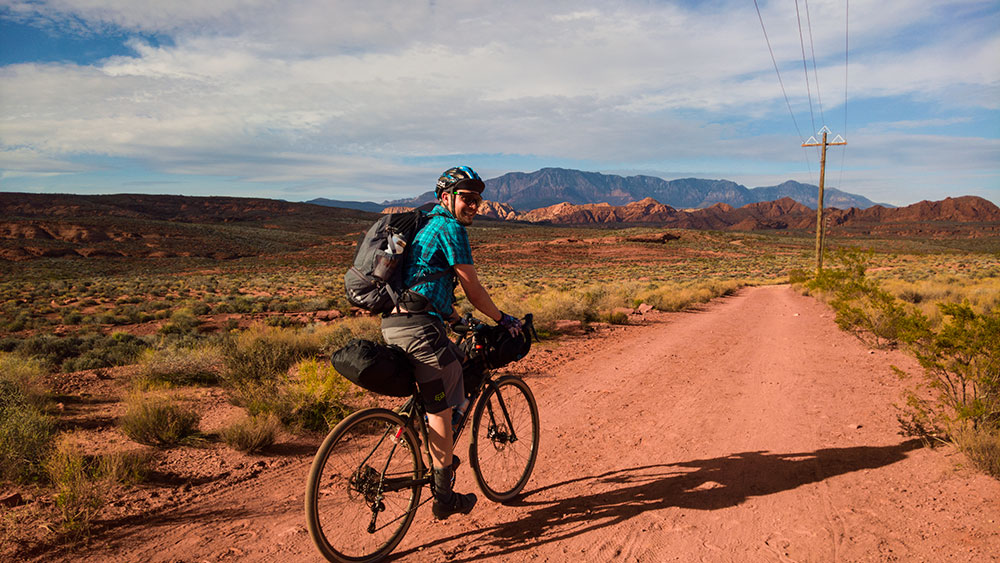 Joey very excited to not be riding through sand.

Once we topped out on Grapevine, our pace began to quicken despite riding with blown legs and feeling like we should be way past the midpoint.
We all knew the drop was imminent. We all also were not sure exactly how it would go. Half the group was on bikes that weren’t exactly right for techy, loose, super steep downhill riding. The other half was on bikes that unloaded would be fine, but they were loaded.

I was pleasantly surprised how well the Revelate bags felt loaded on the Fatboy. Fat bikes, despite what some aficianados will try to tell you, tend to have slow steering meaning you kind of have to muscle the bike around. Adding a little well placed weight to that mix and it didn’t change the way the bike handled hardly at all. This meant I was able to ride down the drop into Prospector with minimal pucker factor. KB was able to ride some of it on her singlespeed and the other half of the group, well they got to walk.

And then there was more sand. Luckily, this time we knew it would be short lived and that Prospector would be fun and fast as we moved into the last leg of our journey. 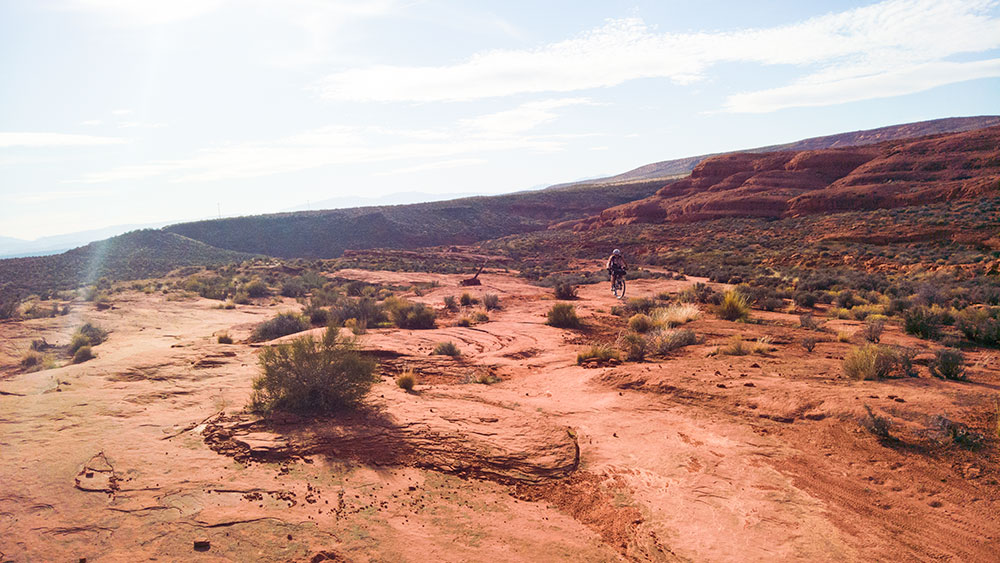 Have you ever seen a tandem on slickrock?

Prospector didn’t come early enough, but was just what we needed after our dirt road flogging we had just finished. Even loaded the trail was fast and fun. We made good time as we enjoyed the singletrack and red rock that we had been eyeing from a distance all day.

The only delays were some packing adjustments. No one dared say it at this point, but as far as gear shake down rides go, this one was going smoothly. We had no flats, no mechanicals and everyone was stoked on how the bikes were handling loaded. I began to experience a bit of load shift on my back which was mostly due to trying not to smash the bag of Doritos I was packing. This meant that I had left the compression straps loose which allowed my stove and a couple of other items to shift down and into my back. A quick rearranging and strap pulling and I was good to go.

Joey, having been in a rush, had packed mostly heavy stuff on his back and after three hours of riding was begin to feel the soreness that comes with riding a bike for three hours with heavy stuff on your back. Some rearranging of his load and we were good to go. 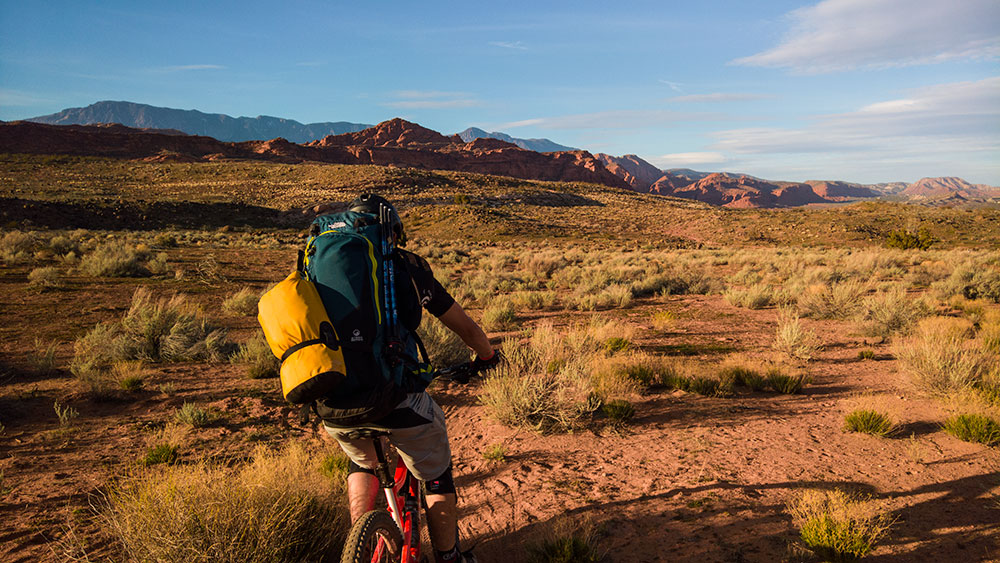 It was at this juncture that I felt we were close enough and broken enough that some whiskey would be right. Out came the flask and the three of us making up the back of the pack, took a hit.

And then we pedaled to camp. 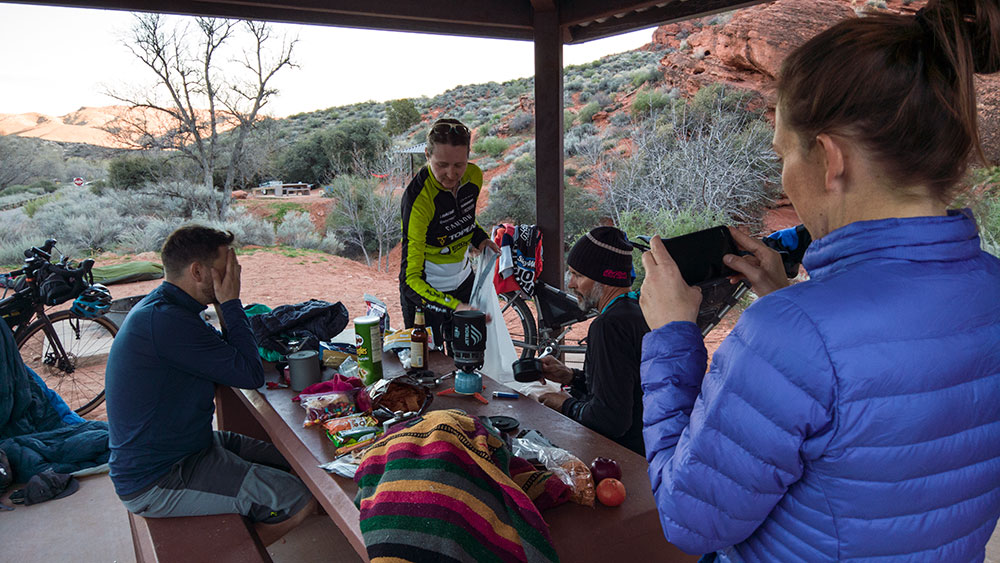 This is what a camp with 5 bikepackers in it looks like.

The flasks and Doritos came out in short order. The whiskey took the edge off and the Doritos filled our bellies like the always do after almost every ride. We had stashed a few beers at camp when we dropped our firewood and these were happily sipped upon as we all began to rip our packs apart and find our stove and food.

The sun dropped behind the cliffs and we knew that burning all the wood that Papa Brinkerhoff had loaded into my truck in one night was going to be a tall order. KB got the fire roaring and we settled in for a night of sipping on flasks, telling stories and in general doing what we do. 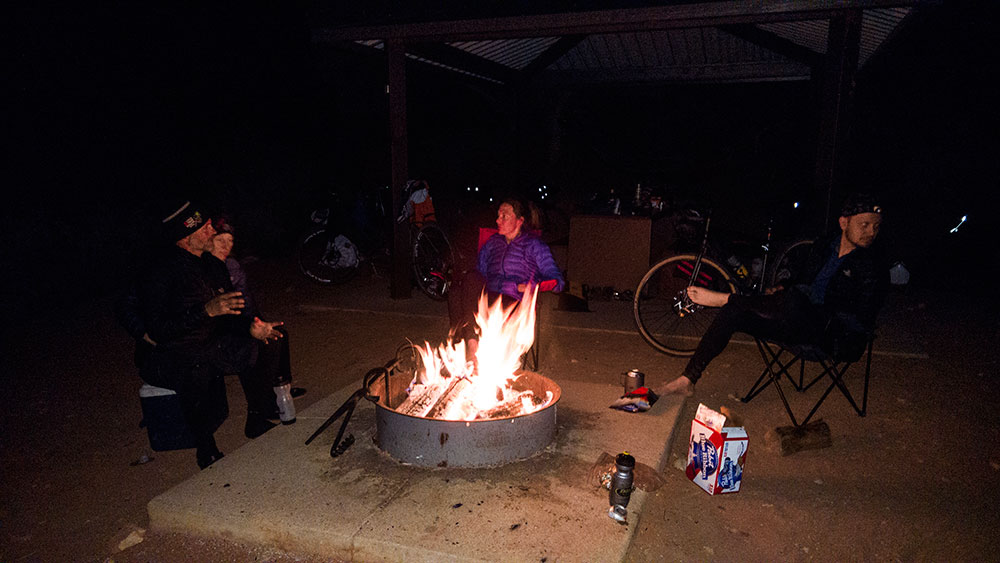 Hobo life at its finest.

Being the dictator that I am, I decreed that no one could go to bed before 9. This was more or less obeyed and at 9 PM sharp, the girls began making their way toward their down cocoons. The rest of us stayed up to drink, shoot the shit and do what we do. 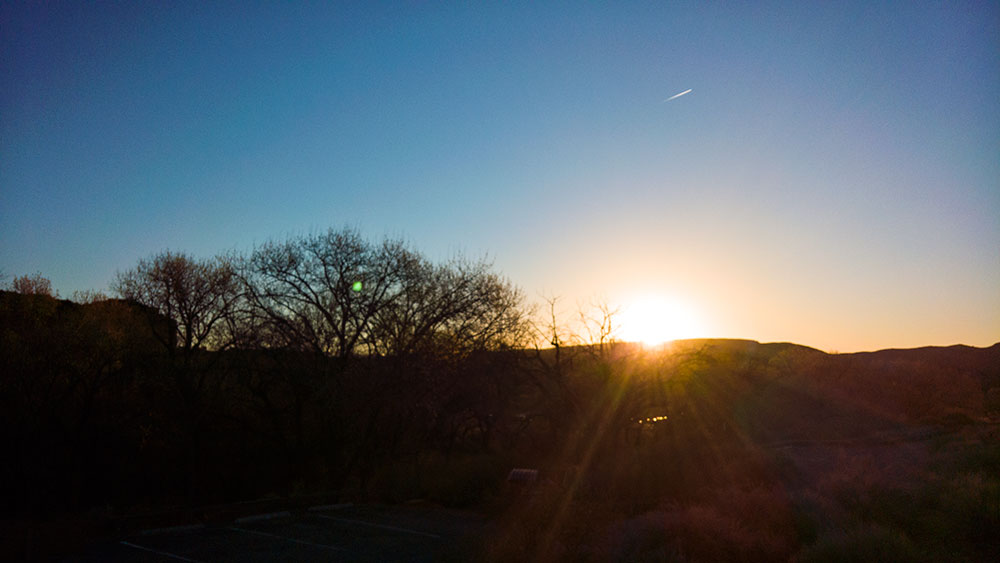 As these things tend to go except for when Ben is around, I got up and slowly got another fire going and water started for coffee. The camp lethargically came back to life.

And then there was one thing left to do, pack up and head home. Our route back was to be the same. Prospector felt awesome, once again being fun, fast and singletrack. Unlike the day before, our first half of the ride went by in about an hour.

Once we made it to the end of Grapevine, Joey made the logical decision and hit the pavement to avoid the sand with the AWOL. The rest of us headed back into the pain cave.

Being on the Fatboy, I had dropped back on Prospector and Grapevine struggling a bit to keep the big tires rolling fast enough to stick with the group. Once we hit sand, the roles reversed and I hit Powerline first only to realize I should have started snacking about a half hour early. While I waited, I began smashing food into my mouth. 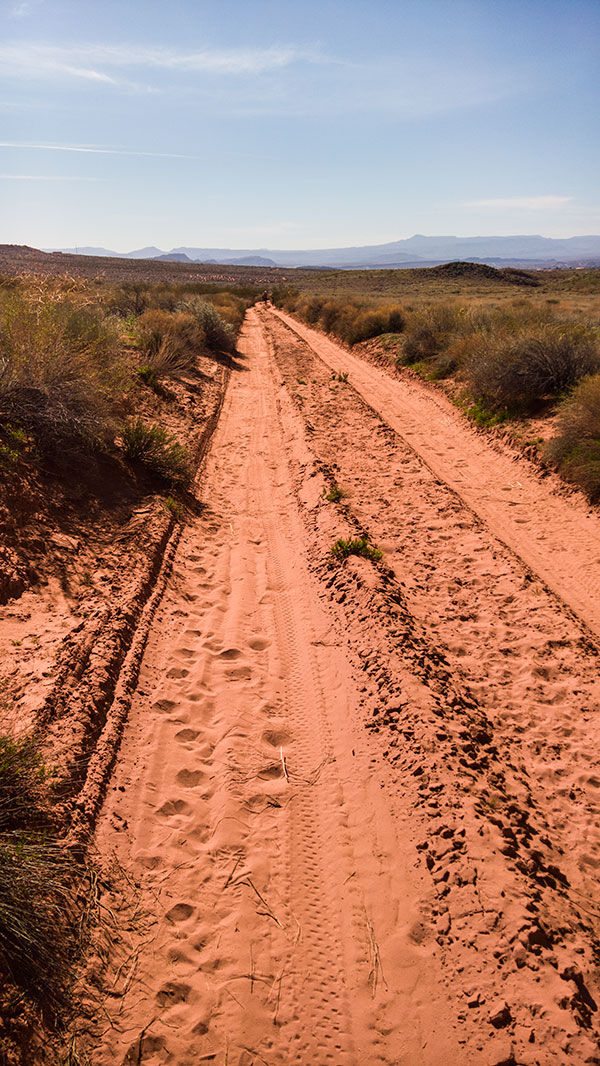 The others came in pedaling. 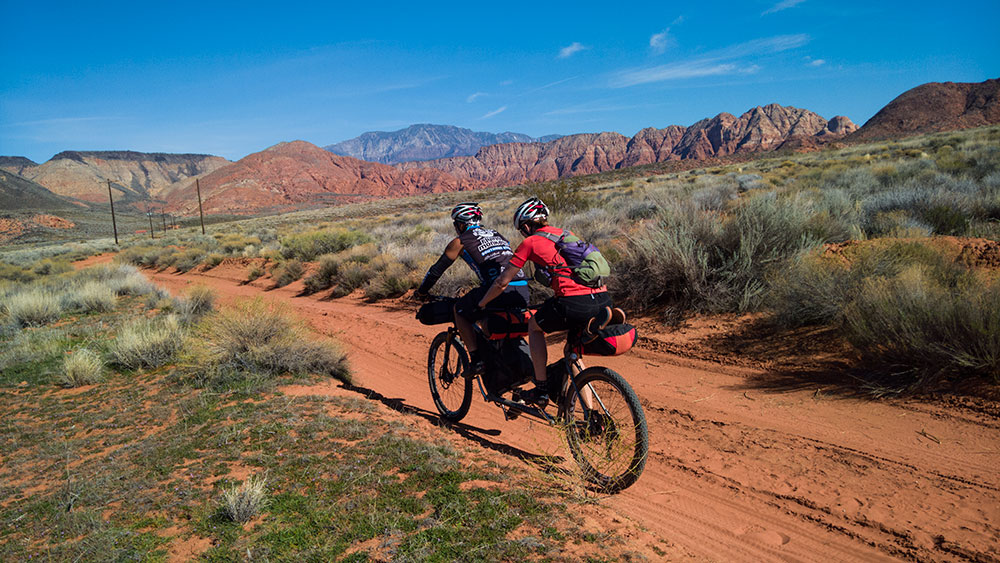 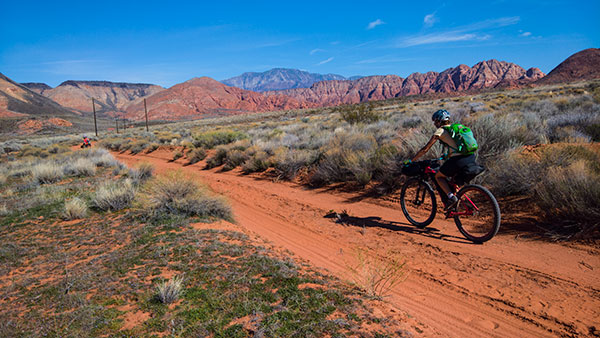 Kenny and Heather headed up Powerline and left me in the dust. I was stopping at the top of the first few climbs to eat and it wasn’t until the last climb that I felt like the bonk had been properly handled. This coincided with my attempt on the Powerline climb ever despite being loaded which still wasn’t good enough to make it to the top.

We regrouped at the top and once again felt fast on the pavement back down to T-bone. Once back to Pioneer Park, KB and I split off and rode Pioneer Rim. I’m not sure exactly what they were thinking, but when I bunny hopped my fully loaded fat bike over the Narrows, the lady underneath squealed and kind of made the whole trip worth it.

To say I was excited was indeed an understatement. Luckily, my excitement for what I hoped would be an awesome trip was valid. Can’t wait to do it again.
This post originally appeared on the Mooseknuckler Alliance.